A blurb, a cover design, a back jacket


Aside from the cafe artiste (with a Mac's sliver of matte aluminum-clad screen positioned next to an Americano), I'm supposing that most writers tap tap tap in isolation. When they're lucky they can break from that creative solitude and rely on the kindness of colleagues, with whom they've established a quid pro quo relationship: "Sure, I'll happily read your _____ [novel, story, play, or poem, screenplay...]" (Of course there's an unstated but completely understood reply: "So long as you return the favour and read my _____ [novel, story, play, or poem, screenplay].")


This time around, C and D, two locals, came over to my place for dinner and presented feedback, mixing kind words with excoriating ones. (During the recovery period later that night the old chestnut "With friends like that who needs enemies?" blossomed in my consciousness a few times. As did "Be careful what you wish for" with an addendum: "You asked for criticism, what did you expect?!?")


The third colleague-reader, thousands of km away in Ontario, emailed me a short list of literary misdemeanors and freely offered a blurb—

From Up River and One Night Only is not your typical rock 'n roll novel. Sure it's full of wild misfits, day job drudgery, and dreams of stardom. But the real headliner here is Grubisic's intoxicating, immersive language. It's a cacophony of linguistic power cords, a picaresque road trip with no particular place to go. We have never seen a coming-of-age story quite like this one.
—Mark Sampson, author Sad Peninsula and The Secrets Men Keep


For a novel set in 1980 and featuring adolescents making decisive moves from their 1970s-era youth to 1980s-influenced adulthood, discussions between Finn at Honk Honk Graphic Arts and myself centred on all things vintage—from orange, brown, and yellow smiley face wallpaper (not desktop wallpaper, but the kind of wallpaper that came in rolls and was used to decorate a kid's room or kitchen) to a circa 1980 photograph from a friend's archive of high school party pics. The result of our conversations and exchanges of historical images (including flocked brocade wallpaper that, while historically true possessed a visual loudness that made it impossible to use) can be see below. Hello 1975 and 1980 in all your decade-specific glory— 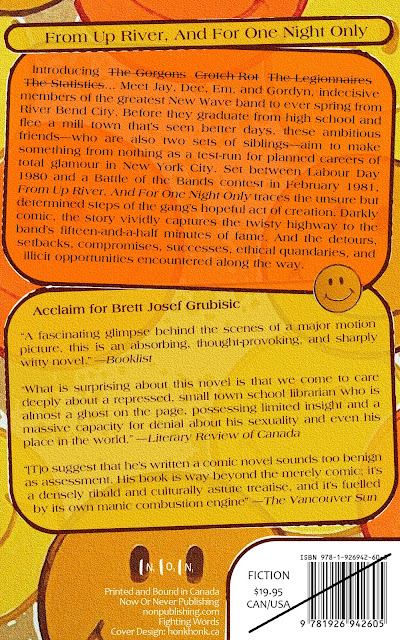 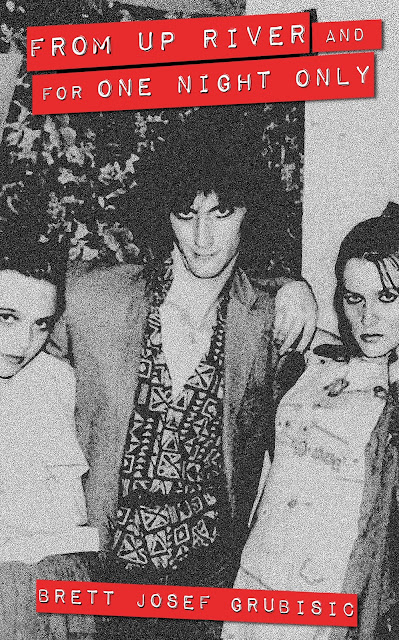 Even though once upon a time he’d caved to pressure and agreed to make an effort, Gordyn could admit that his opinions about the Barbershop Harmony Society had lurched drunkenly from the get-go. The weekend gatherings organized under the Society’s firm if benevolent rules (which under certain light looked fascist, Gordyn thought, a benevolent dictatorship) felt constricting enough already. Worse, the endless quest for “Let’s track down that darned overtone, gentlemen. From the top, 1 and 2 and 3—,” that holiest of grails, edged him nearer to insanity.
He reported these facts to Dee. Her dull parallel experiences with their mother meandered from a placid stream of easy listening radio tunes before and after torturous Canadian TV to pulverizing crackers with a rolling pin for next week’s casseroles #1 and #2 while listening to reminiscences about girlhood crushes and huge family picnics in Quebec. Moping, Dee stared out from shut windows and wished for a pet—something high-strung and requiring long walks, preferably.
Intellectually, Gordyn saw the sound reasoning of events reserved for fathers and sons. He admitted too, the choice could have been worse. Like Jay’s dad, his might assume thrilled, bellowing attendance at the rank air—BO, popcorn, and snuck booze, reportedly—of pro-wrestling matches. Or, debate-worthy and fierce dedication to idiotic ring heroes named Mr. X and André the Giant. Or, Edmund could similarly expect eternal low-wattage bouts spent in grimy striped coveralls while stuck beneath a car on jacks in an unheated garage. And see his face register signs of deep caring about the manly arts of eyeballing spark plug corrosion and oil viscosity.
Selling the surefire barbershop quartet idea, Edmund had tousled Gordyn’s hair (prompting corrective mirror time shortly after). He lured him with the inevitability of trips to fancy hotel banquet rooms in historic Philadelphia and sun-dappled Sacramento. He’d repeated “We’ll have a blast, just you wait and see” with an air crash prayer’s desperation. That last promise proved exactly halfway correct. The former anchor baritone of an army barracks quartet, Edmund returned to the stage with unabashed gusto, eating up the attention, Gordyn’s mother commented, like an elephant with peanuts.
Two years and seven months later, the upcoming events—definite anti-blasts now—loomed greyly, ominous as mushroom clouds. Blind to his son’s heels-dug body language, or simply ignoring it, Edmund charged headlong into literally harmonious crowds, visibly eager for trial runs of fresh jokes he’d scooped up at the office and revved to propose catchier arrangements for standards.
They’d made it as far away as a plum-curtained stage in a high school gymnasium on the outskirts of exotic Spokane, Washington, Gordyn noted sourly, the Versailles of eastern Washington.
Earlier, Gordyn had predicted that Edmund’s enthusiasm would turn out to be a phase. Over and again, he felt annoyed by that paltry, flawed intuition. Instead of a showdown he continued to go along, never not straggling. Sooner or later his father would grow weary of his captive son’s clearly signalled acts of going through the motions and giving not one breath more.


Permanent authentic smiles cemented on, gleeful Evergreen District fathers, visiting from as south as Oregon, strutted and yukked in escalation, saying “Right as rain,” “Smooth as silk,” and “Fine as frog’s hair” as they adjusted velvet bow or string ties and twisting waxed moustaches (real and mimed varieties). They threw in “23 skidoo” alongside hearty backslaps whenever possible, as though they breathed in the Edenic air that had circulated before the invention of mustard gas and trench warfare, when everyone exclaimed, “Golly gee whiz, what a humdinger!” whenever one of those bicycles with an enormous spoked wheel wobbled by.
Surveying the rooms coldly, Gordyn thought that bygone became bygone for a reason. Each and every one of them took strides away from the past each and every day, so why pretend otherwise? “Knucklehead,” he’d hear, sure that none of the men used that one at home. “‘Rapscallion’?” he’d hiss. “Yeah, right, dipshits.” He yearned to spray “Wake Up, You Fuckers” on walls using black paint.
The sons, meanwhile—of two unequal-sized camps: dutiful but sullen and watchful for cigarette-sneaking opportunities, or chirpy chips off the ol’ block—milled around perimeters until instructions boomed from one of the handful of regional bigwigs. The Big Cheese would whip out a brass kazoo and declare they ought to all clear their throats and warm up with “Wait ‘til the Sun Shines, Nellie” before the actual competitive harmonizing hummed into buzzing life. “Gentlemen, start your engines,” and another round of yuks echoed.
Alone on washroom breaks, Gordyn would sense his father’s need for a renewed display of mooing enthusiasm. He’d stub out the hour’s one pleasure and blow smoke out any window he could crack open. “Fiddlesticks,” he’d mutter, on a roll, and dawdle a few extra minutes. “I’ll skedaddle a while, crocodile.” Activity in rooms with toilets was sacrosanct to Edmund. He’d never ask.
Even ad libitum, the true love of barbershopping that had once sparked Gordyn’s sense of wonder, gradually tarnished due to continued exposure. Returning on Saturday nights, and sometimes Sundays, he’d crumple the Delphine-sewn green and white striped vest at the bottom of his closet. But like a magical fairy tale object its reconstituted form—laundered, ironed, folded into a perfect square—appeared in a T-shirt drawer at the dawn of every barbershop weekend.
His mother made no secret that she appreciated the father-son hobby slot. More to the point, Gordyn suspected, she relished the serene, joke-free household of their occasional days away.
Everyone grumbled about The Chords of Damocles, a weak, nonsensical pun of a quartet name, but since a previous generation had voted it in an abrupt change seemed tantamount to an insult, a back rudely turned on glorious history. And if nothing else, barbershoppers bowed deeply at tradition, or one wholesome strand of it at least.
On nights before the other classic warm-up number, “Hello, My Baby,” launched in wolfish croons that bounced around the hall, the painfully distended “rag time doll” of an otherwise unremembered dream woke Gordyn before sunrise. At the twice-yearly meet-and-greets with perfumed clusters of Sweet Adelines in billowy translucent pastels and churchy white stockings, childhood complaints about a sudden fever or catching a bug sprouted on Gordyn’s tongue.
Oblivious, his father pushed him toward girls, pointing right at one or another he’d deem “a beaut.” And as Gordyn got older Edmund added “Old enough to bleed, old enough to butcher” in a husky, hopeful whisper.
Gordyn always said “Cute outfit” in a clipped voice that implied the spite-full opposite. “Did your grandmother sew that at home?” He absorbed details with Mr. Blackwell precision—constellations of white cotton eyelet, a bubble bath froth of lace trim, satin ribboning from the More is More School. He regretted the girls’ dismay, but couldn’t resist; any shame evaporated quickly.
By mid-Grade 11 Gordyn felt certain that if he spotted one more copy of the Norman Rockwell poster of men harmonizing with sharply parted oil slick hair and comically high-waisted pants, he’d heave. He embraced the dramatic scenario of going postal or transforming into a mad, crashing china shop bull, foreseeing his father’s embarrassed expression and beet-cheeked vows to never return. As an idea, raving lunacy had its uses.
Edmund, now on the Evergreen executive, hoped to leave his mark and bring the group’s name up to date. West Coast Express, he offered (with sincere if tentative alternates: Vest, Left, Best), but everyone thought it reminded them of a passenger train.
Beyond tuned Society ears, Gordyn recommended The Dapper Hams, and said as much whenever the topic arose. His father wondered aloud how someone so young could get so cynical. The hurt expression guilted Gordyn into screwing on a smile and tilting his neck and aligning with the lonesome, moon-worshipping wails of the rest.
Posted by Brett Josef Grubisic at 14:16 1 comment: